Last year, about this time, I posted about a metric I wanted to collect data on – the 5-year-value of new members. I was working on a Rally presentation on Metrics.

Here’s what I asked for:

The division of those two numbers says that on average, every donor recruited five years ago has given that much money to the organization. That’s the 5-year-value of new members.

Of course, many of those new donors never gave again. Others gave two or three years and then dropped out. And still other gave, dropped, and came back. But the 5-year-value still works as an average. 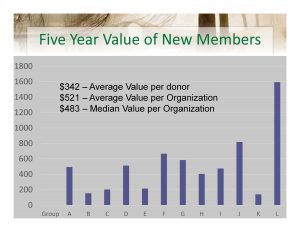 I did end up presenting on Metrics at Rally. I thought it was pretty good, but as is so often the case, I had too much material for a 90-minute workshop. The next time I do it, it will be better – like in Texas (2/28), Rhode Island (3/9), Pennsylvania (5/18), and possibly again at Rally in October. (Hope to see you there!)

So let’s do it again!

Here’s what I will need from you if you’re willing to participate:

If you did it last year as well, compare the two numbers. Are they similar? If they differ dramatically, can you explain why?

If you can, also isolate what it cost you to recruit those members and donors in 2014. What did you spend that year on recruitment?

And now is a good time to isolate what you spent on recruitment in 2018, too. It will help you with your metrics calculations in 2022!

This is the point I make in the presentation:

It’s like a black box with $150 inputs on one side, $400 outputs on the other, and five years of donor communications, engagement opportunities, and renewal notices in between.

Ready for even more fun? Compare the 5-year-value of new members by Source Code – direct mail members versus social media members versus Board recruited members, and so on.

Hint: if you are not capturing source codes already, it’s not too late to start. And you’ll be glad you did five years from now?

Got source code data from 2014? I’d love to learn from your experience!