Several years ago, Vu Le (Non-Profit AF) wrote a critique of donor-centric fundraising. In the several weeks that followed, I wrote a critique of his critique, arguing that Le’s definition of donor-centric fundraising was based on several inaccuracies. That post, What is a Donor? And What is “Donor-Centric”?, remains the most widely read essay I have ever written and still enjoys readership every week.

I wrote another post several weeks later on the concept of “othering,” based on a second, important point in Le’s post, and it seems timely to revisit that idea today. Most of this is an update from that post in 2017.

Here is the paragraph from Le’s critique:

[Donor centrism] perpetuates the othering of the people we serve: An insidious effect of the Savior complex is that people see other people as “others.” “Others” exist in our minds in a binary state, either as enemies, or as those to be helped, never our equals. With this current political climate, we’ve been seeing a lot of people perceiving and treating fellow human beings as “others/enemies.” But the “Others/People-to-be-helped” mindset is also destructive……We cannot build a strong and just society if we reinforce in donors the unconscious perception of the people we help as merely objects of pity and charity to be saved.

You might react, as I did on first reading, that this doesn’t really apply in the conservation community.

But we’d both be wrong.

In the spirit of “language matters,” let’s look at three words that we use very commonly and that betray our “othering” tendencies. The three words are “educate,” “protect,” and “landowner.”

In nearly every strategic planning exercise with which I have been involved over the past 20 years, someone has added a strategy or a goal that has something to do with “educating the public.” The underlying frame of reference is that the public doesn’t know what’s good for them or what solutions might be out there for their particular issues and problems. We do! We have science and technology and GIS, and together with two scoops of hubris, we’re well positioned to show them exactly what to do in their own best interest. We just need to educate them.

We barely get away with this in a culture that is predominantly white (not to mention the current political climate trending to anti-science). Many of us have come to understand that we don’t have a chance in Native American communities, but we still believe that African American and Latino cultures are disinterested, apathetic, ignorant, or some combination of all three. Collectively, they (including the ignorant whites) are all “others” needing to be educated.

And our educational offerings are all based on the same premise: find a local expert and have them “teach” us about whatever field they are expert in – usually in the form of classroom-style lectures or guided field explorations. And the people who respond to this type of opportunity are most often educated whites who are comfortable in that environment.

When reaching out into non-white communities, we talk about needing to listen first. Not that it’s bad advice necessarily, but the underlying – “othering” – assumption is that if we listen hard enough, we will find places where we can teach them to use our solutions to fit their problems.

What about the possibility that they might offer a solution to something we’re working on? Are we willing to listen that hard? To approach them as equals? How do we learn to listen for wisdom we can apply for ourselves instead of just ideas that connect to our solutions for them?

Le calls this kind of othering an “insidious effect of the Savior complex,” and he’s right.

What if we changed the language? What if we talked more about “engagement” or even “mutual learning opportunities” instead of education?

The word “protect,” of course is embedded in everything we do. If land is colored green (or sometimes brown) on a map, we interpret that to mean it is protected. If land is white or some other color, it is referred to as a “gap” between protected areas – ie. “unprotected.” In fact, both ideas depend on some amazing assumptions – that land in public or non-profit ownership is protected and that land in private ownership is not.

It turns out to be pretty easy to disprove both. Strip mining, clear-cutting, lethal predator removal, controlled development, and even outright sale of protected properties aren’t unheard of on land owned by federal and state agencies. And the strength of land trust conservation easements is certain to be increasingly tested over time. 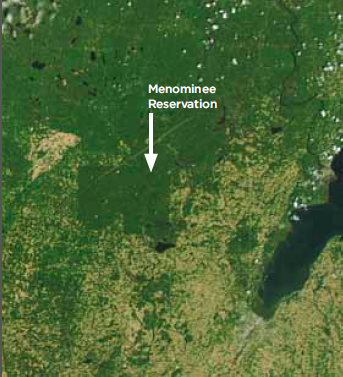 On the other hand, the Menominee Forest has been sustainably harvested for several hundreds of years by the Native Americans in central Wisconsin. The land is so starkly different from land around it that you can pick out the forest from space.

And talk to western and southwestern ranchers about whether the land that has been in their family’s continuous ownership since the civil war is protected or not.

To be sure, there are “levels of protection,” but as a conservation culture we use the word far too freely and cavalierly.

For one thing “protection” implies a singular act. What we really mean is that the land is in nonprofit or public ownership. And we proudly claim credit for having “protected” numbers of properties and acres. Any land steward will tell you that land protection is an ongoing challenge.

What if we changed the language? Instead of land that we have “protected,” how would it change perceptions if we talked about land that we are caring for, stewarding, restoring, or managing for habitat – and never even mentioned land that we had protected?

Citizens for Conservation, an Illinois land trust, talks about “saving living spaces for living things.” I like that a lot.

We use the word “landowner” all the time, and most of the time, it’s completely fine because it describes the literal truth. But what about landowners on whose land we have easements?

An easement landowner is too often considered almost as an adversary – someone we tolerate, monitor, and occasionally sue as necessary to prevent them from doing something contrary to our interests.

We can educate them first and then help them protect their land.

But what if we started inviting them into the center? As equals. As partners.

What if we referred to easement landowners from day one as “conservation partners”? What if every interaction returned to the agreed-upon conservation values for context instead of potential violations?

What if the line below which they signed their name on the monitoring form read: Conservation Partner?

So, here’s how all this applies to donors and donor-centric fundraising: We need to be careful not to practice “othering” on donors, too.

The problem with our donor communication (letters, newsletters, website material, even Facebook and other social media) is that it is written as if the reader/donor is NOT part of the center.

In other words, that donors are “others” too.