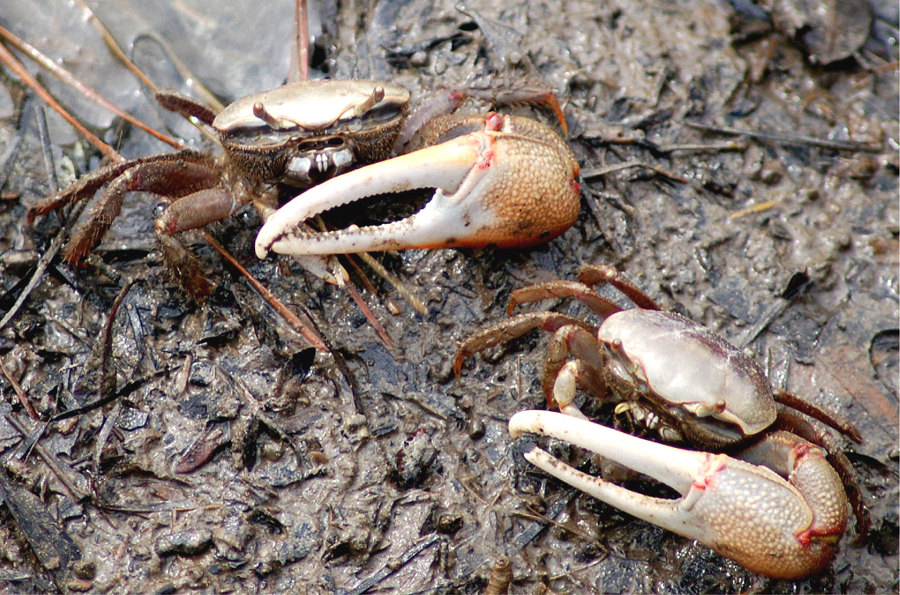 One of the problems with field trips is that groups of people make too much noise.

“Shhhhh,” the Naturalist said for the third time. “Listen.”

For the life of me, all I heard was the wind in the leaves, and the people behind me clomp-clomping on the boardwalk.

Wait – back up. Wrong time of year and wrong type of leaves. What was making that sound? Slowly, various members of the group looked down, below the boardwalk, and they showed everyone else where to look.

The ground was moving in a way that nearly gave me vertigo.

Hundreds of them – maybe thousands. Scuttling sideways, each one with its single, oversized claw held up menacingly. “You guys stay away from us, or else!”

It’s time for my annual reminder that you guys need to get outside.

Is there a project you haven’t seen, a trail you haven’t hiked, or a river calling to you to bring your kayak?

And I came back with the Fiddler crab story. I could also tell you about the 12-15-foot gator that rose up out of the water to look at us. And the geckos. And the white ibis. And the fledgling yellow-crested night herons. And how their nest was strategically located on a branch above the water just out of gator reach, but close enough to give other predators second thoughts about venturing out on that limb. And the flock of spoonbills feasting in the shallows.

Before I took that trip, I knew about most of these animals. (The symbiotic relationship between the gators and the herons was completely new to me.) But at some level, it was all theory. Their stories and their very existence was theoretical – as least as far as I was concerned.

But by going there, and by walking along with 30 other (noisy) people and one really great naturalist, these theoretical animals became experiences. My third-person narrative became a first-person testimonial. Instead of “I learned about,” it became “I saw, I heard, I smelled, and I felt.”

Whether you are an Executive Director, another staff member with fundraising responsibilities, or a board member, giving yourself permission to make these stories personal by visiting the sites you need to raise money for will help you a lot. It will make you more effective when you talk about it. It will help you imagine taking donors there. And It will keep you motivated, too.

If you supervise others, give them permission also. Give everyone the afternoon off one day and show them one of the lesser known projects. Change their perspectives from third to first person.

Now’s the time. Find your story. (Hint: This is the fun part!)

Get these projects out of your head and into your heart.

Tell ‘em David told you to.

PS: You get extra brownie points if you take a board members with you.